20 km between forests, waterfalls, villages, rivers and deep gorges. A journey that seems to take us back, in time in the dreamy atmosphere of the fjords.

There are places in the world that leave you breathless. Unspoiled places that seem to be made by human hands for perfection but instead Mother Nature has created over the millennia calmly and patiently. The Norwegian fjords are among these: a work of art formed thanks to the retreat of the glaciers and the flooding by the sea of the valleys in the shape of U. Elected World Heritage by UNESCO in 2005, you can visit them in many ways, including on foot. There is a means, however, that is not always taken into consideration, a means as old as it is fascinating: the train.

We are waiting at the station and here, with the infamous Norwegian punctuality, we see coming a vintage locomotive with green cars. 20 km: this is the distance to travel in order to venture into a unique place. 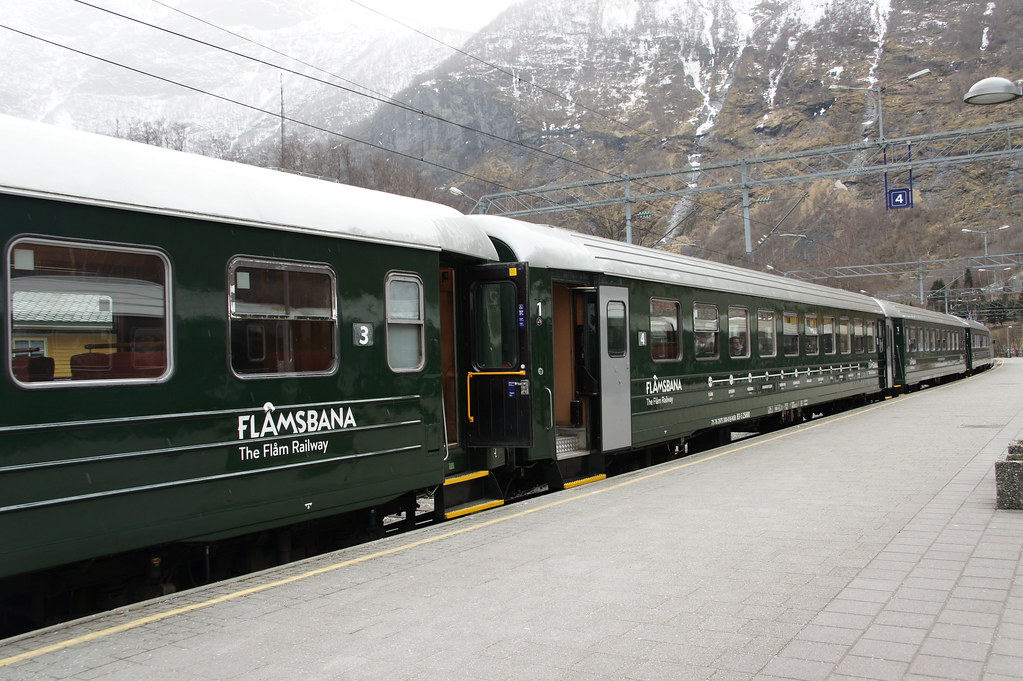 Unspoiled nature, waterfalls, breathtaking landscapes. A show that only Flåmsbana or Flåm railway can give us. Among the Western Norwegian fjords, this line climbs up and is considered by the National Geographic to be among the 10 most evocative in all of Europe. From Flåm to Myrdal, a journey of about 50 minutes with a slope that can reach 18% and with a driving speed of 40 km per hour so to look without rush and take pictures of the wonders that the route offers.

Flåm is one of the steepest normal-gauge railways in the world, covering a height difference of about 880 meters via spiral tunnels in the mountains with an inclination of the tracks to the limits of natural adhesion.

Begun in the 20s of the last century, it is only after twenty years of logistical difficulties that the first wagon travels the railway, before as freight transport and then for people, becoming over time one of the main tourist destinations in Norway.

We enter one of the forest-green wagons, admiring the interior with brass finishes and sit comfortably in seats covered with thick red fabric: it seems to be back in time.

With an almost dreamy the train leaves. The first are characterized by the presence of infinite galleries. In moments when the sky is silhouetted on our faces, we notice small groups of brightly wooden houses and the many small waterfalls that flow from the top of the mountains. 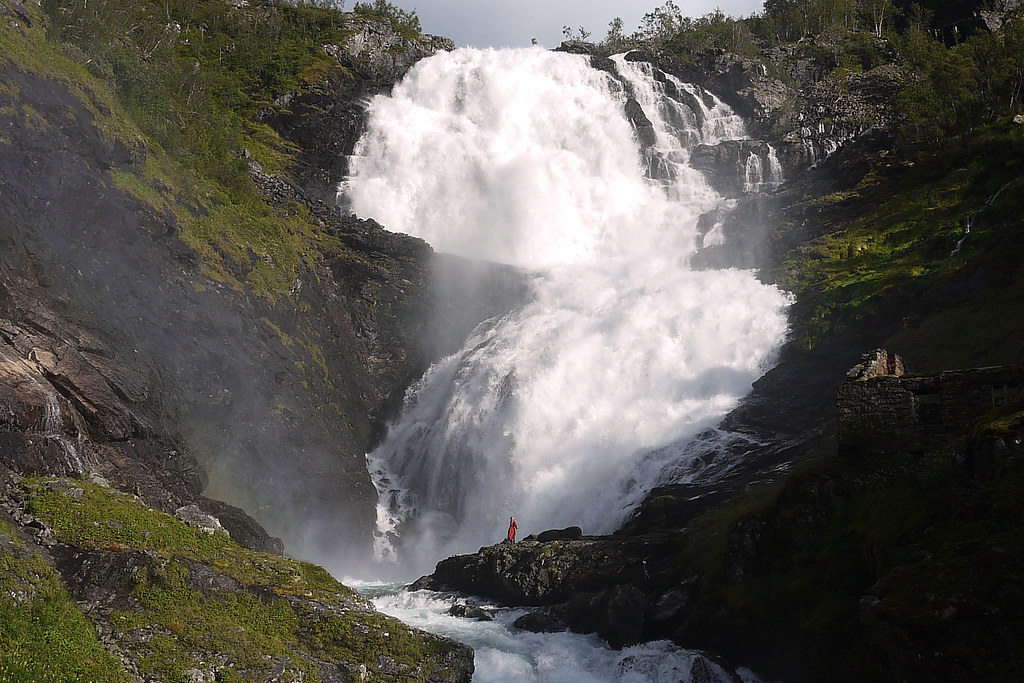 We continue our journey admiring, with the calm that distinguishes this railway line, other wonders of nature among the Norwegian fjords: rivers that cut deep gorges, waterfalls along the sides of the tracks, snowy mountains and other houses hanging vertiginously on the slopes of the valley. It's an incredible show.

The train slows down, stops. We are not at the terminus but in front of one of Norway's most famous tourist attractions: the Kjosfossen waterfall. A few minutes to admire a jump of almost 100 meters all surrounded by background music among whose notes is represented a small show with dancers dressed in fairies that appear and disappear at the sides of the waterfall. At lower altitudes, the coniferous forests appear again, but the waterfalls along the sides of the mountains are still very numerous.

With 440 Norwegian kroner per person (around €49) we have secured an unforgettable experience.

The Flåm Railway includes 5 electric locomotives and 13 carriages, designed specifically for this impervious line. All carriages are equipped with five different brakes, each of which is able to stop the locomotive. During the summer Flåmsbana performs between 9 and 10 daily departures while in winter (October - April) the departures are 4. 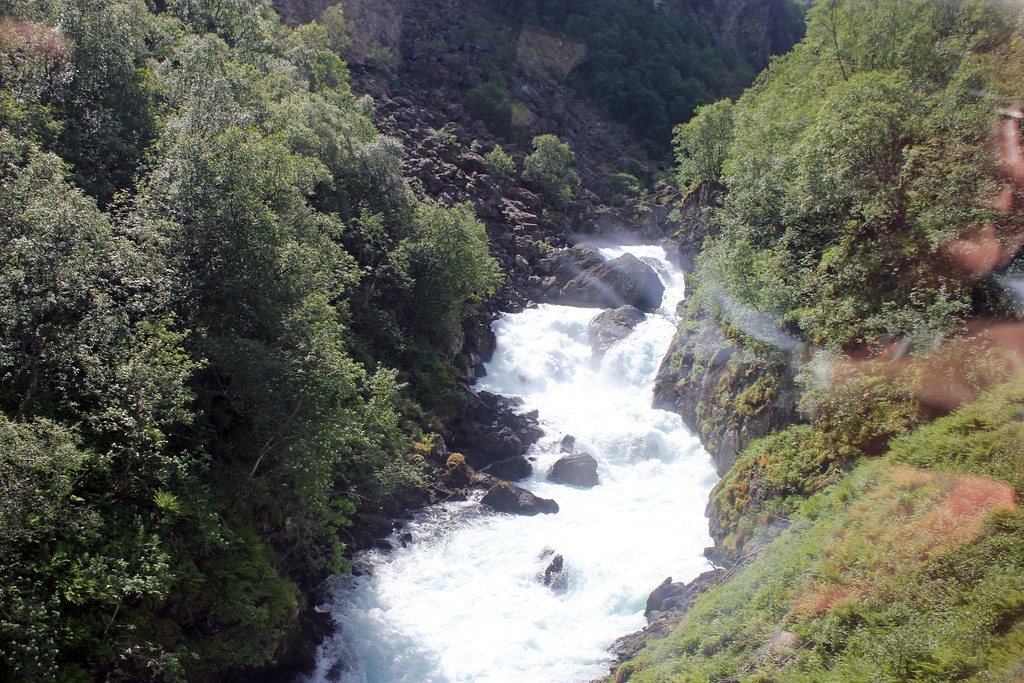 The best time to get on board and admire the fjords of Norway is certainly the one between June and September. The days between the end of June and the beginning of July, in fact, are the most suitable to witness the phenomenon of the midnight sun.

We have made a unique journey. If Lonely Planet also inserts this route among the "the 10 best train journeys to experience in Europe" there will be a reason. And the reason lies in the fact, once you get off the green wagons, we can safely say that you have realized one of those things that you must have done at least once in your life.

More in this category: « Bernina Red Train: all aboard! 4 destinations in the world for cat lovers »