Taste local food is part of the thrill of travel and the discovery of a new country, although sometimes we can find ourselves in front of dishes that can definitely shock us...

If you want to be prepared for any eventuality, here are the 10 most weird foods you can find around the world.

If you think that Italy is immune  strange foods, you have never been to the Italian island of Sardinia. The casu marzu, literally rotten cheese, is the creamy and spicy pecorino cheese on which the cheese fly has laid its eggs: these will turn into larvae, which will eat the cheese. Not for nothing, it is also known as cheese with worms. Its selling is prohibited, so you will find it only on special occasions in direct contact with the manufacturer. 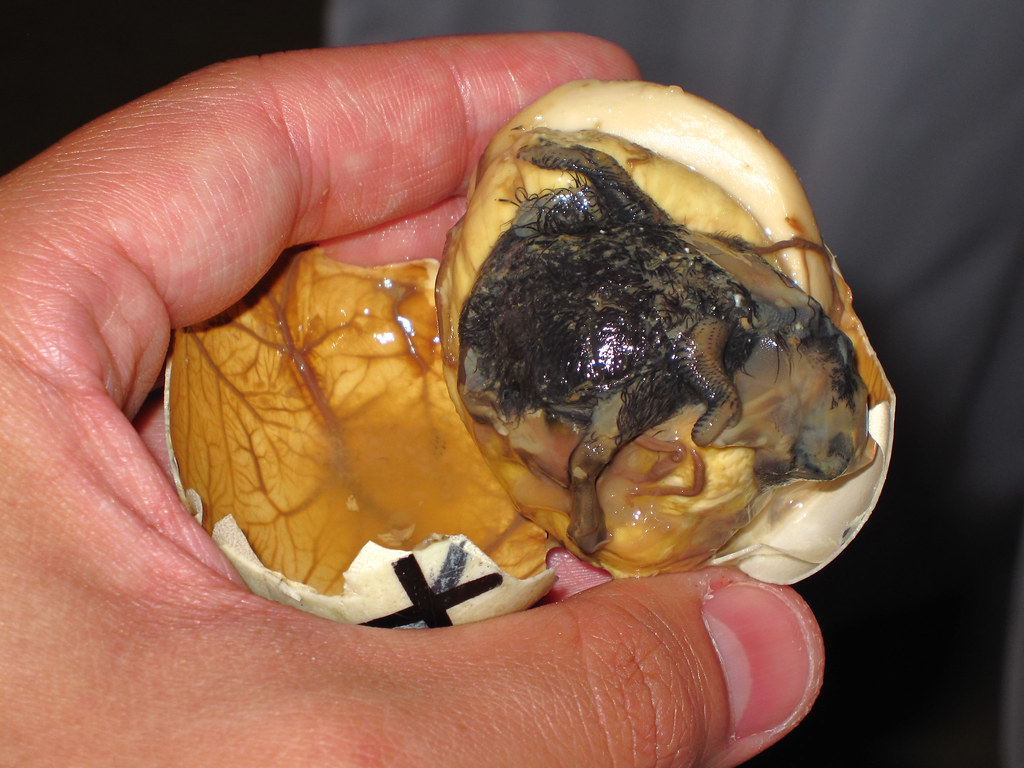 Balut is a typical of the Philippines and some other countries of Southeast Asia. It is an egg of duck or hen fertilized and boiled when the embryo is almost completely formed in the shell. Traditionally it is consumed directly from the shell, with salt and vinegar. It is that will not be difficult to meet during a trip to the Philippines, Laos or Vietnam: be careful not to exchange it for a boiled egg! 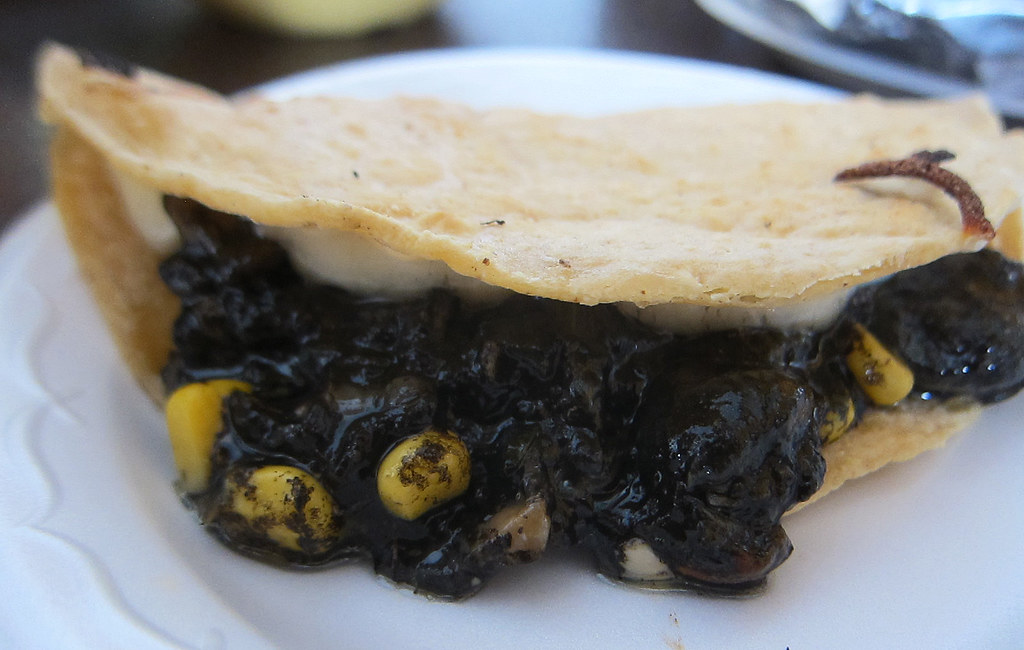 One of the typical dishes of the rich Mexican cuisine is the huitlacoche, a delicious pre-Hispanic culinary heritage. You are about to taste a parasitic mushroom of corn, which grows between the grains of the cobs. It is an ingredient that you will find without difficulty as a condiment of quesadillas and tacos: its natural turns into during cooking.

If in many countries of the world this fungus is treated as a plague to be eradicated because it is harmful to maize, in Mexico its production is fomented and is considered the "Mexican truffle". 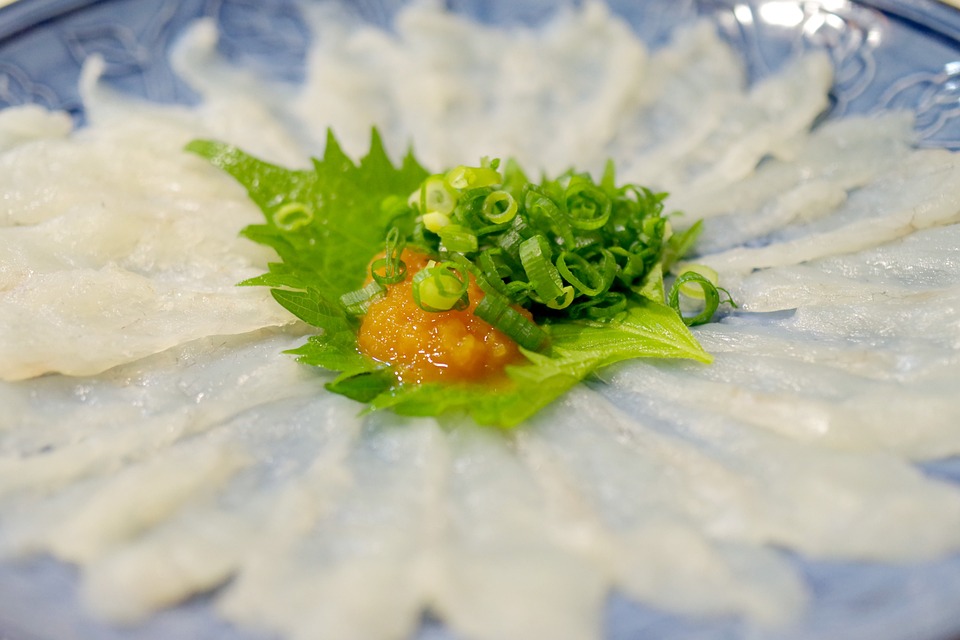 If Japanese cuisine is now recognized worldwide for sushi and sashimi, only by to the Land of the Rising Sun can you face the challenge of trying out fugu, the The characteristic of this dish is that some of the fishball organs contain , a poisonous substance that can only be removed by careful preparation, in order to avoid contamination of the meat.

Given the risk of fatal intoxication, fugu can only be prepared by chefs who have obtained a special license and passed an examination certifying their ability to prepare them. 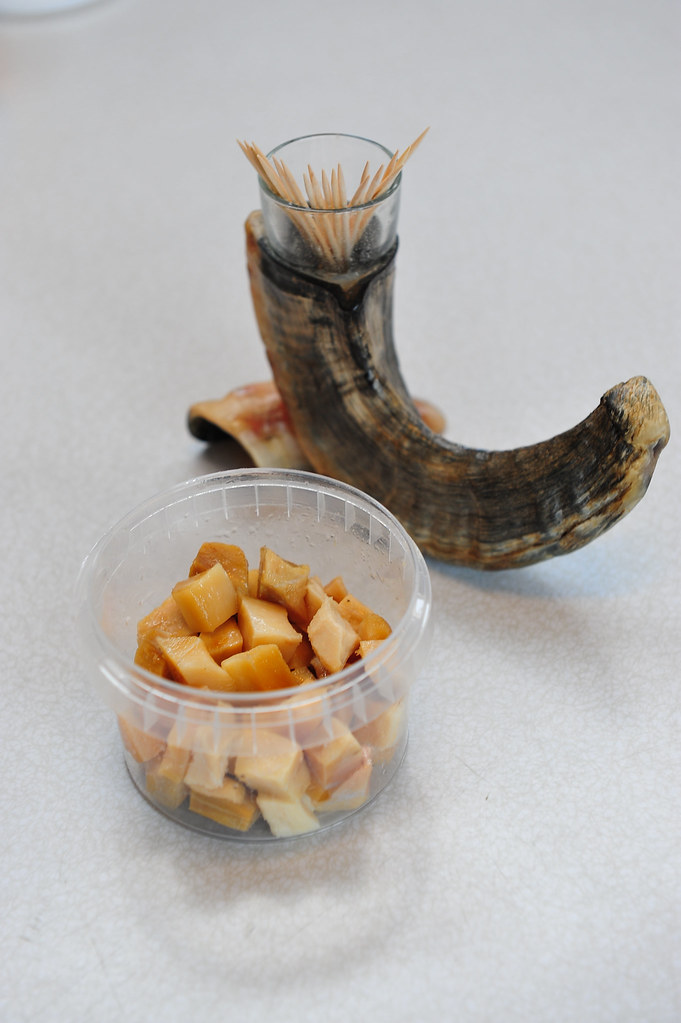 And speaking of poisonous fish, in Iceland you can taste the hákarl, the rotten shark: because its fresh meat is toxic, in order to consume is necessary to let it dry and ferment.

The putrefaction eliminates the toxicity, and you can eat the shark without problems... if you be discouraged by its strong and disgusting smell! The putrefied shark meat is found in all Icelandic supermarkets, so you will not have any excuse to avoid it. 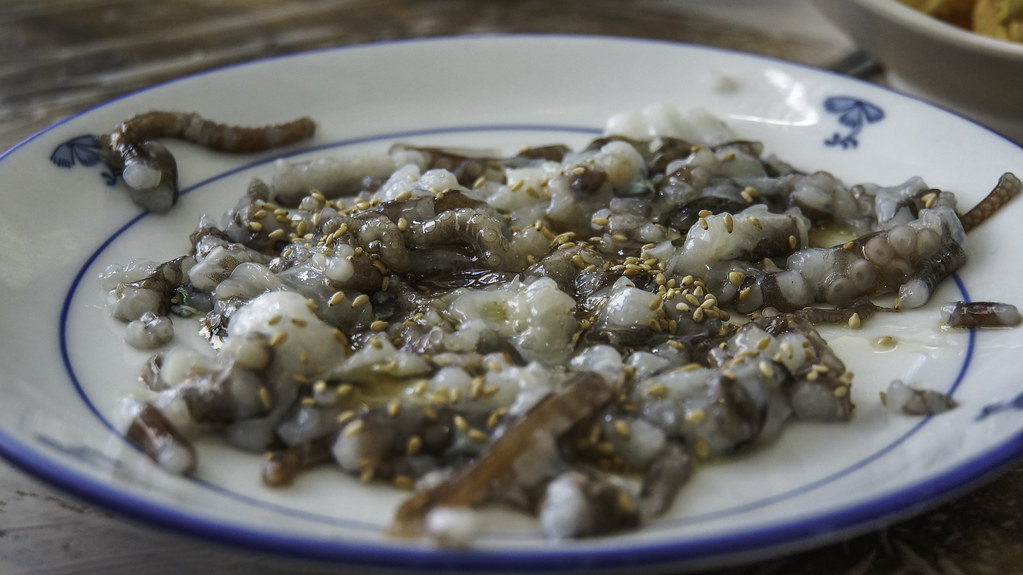 Among the typical dishes of the Korean there is the , a delicacy based on , a quality of small octopus. The particularity of this dish is the fact that the octopus is served still alive, cut into small pieces.

The fully falls into the list of strange foods for the suckers on the tentacles, still active when they are served: the feeling of the suction cups that stick to the mouth and throat when  makes undoubtedly original (and even dangerous) tasting of this dish. Better to chew well before throwing down the bite! 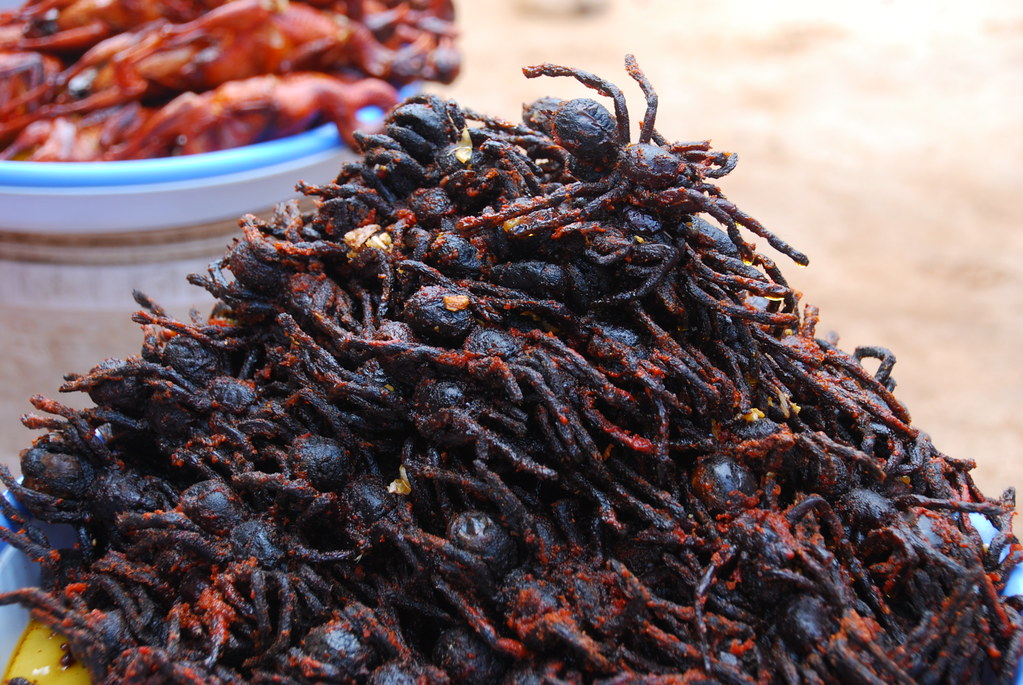 If you are in Skoun, during a tour of Thailand and Cambodia, you might come across one of the traditional snacks in the area, fried spiders.

Spiders are raised in holes in the ground or caught in forests, then breaded in salt and sugar, fried in oil and with garlic. These are not small spiders, but Asian tarantulas whose dimensions can reach those of the palm of a hand. The brave who tried them that the culinary experience is very similar to the tasting of fried prawns... try it for yourself. Chinese delicacy, the Century eggs is nothing more than a duck or quail egg preserved in clay, lime, salt and ash for several weeks, sometimes months.

You will recognize it for its almost "prehistoric" appearance As if it were a fossil egg: opening it you will see that the yolk has assumed a dark gray color tending to green while the white has become a gelatinous gray. The taste is salty, and it is served as a cold dish, along with appetizers and side dishes. Keep this in mind as a gastronomic experience during your trip to China! 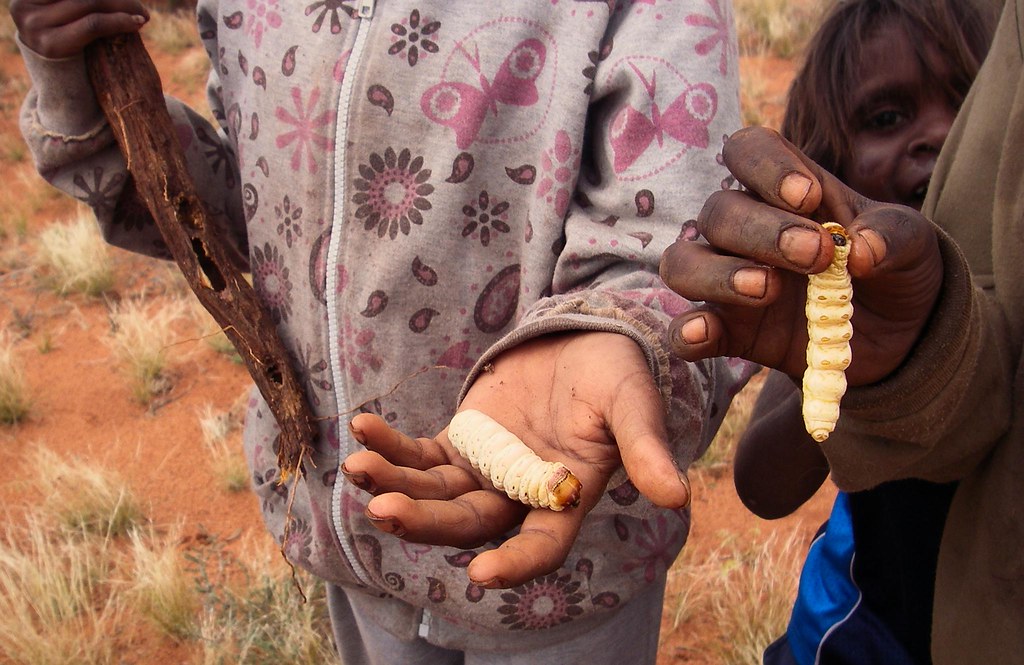 One of the basic dishes of the menus of the aborigines of Australia are the moth larvae that grow in the Australian desert.

Great source of protein for the aborigines, the moth larvae are making space in some exclusive city restaurants serving traditional aboriginal dishes, along with ants, spiders, and locusts. The taste seems to be a cross between the chicken and the shrimp and, experts say, are tastier if cooked on the barbecue and eat hot ... 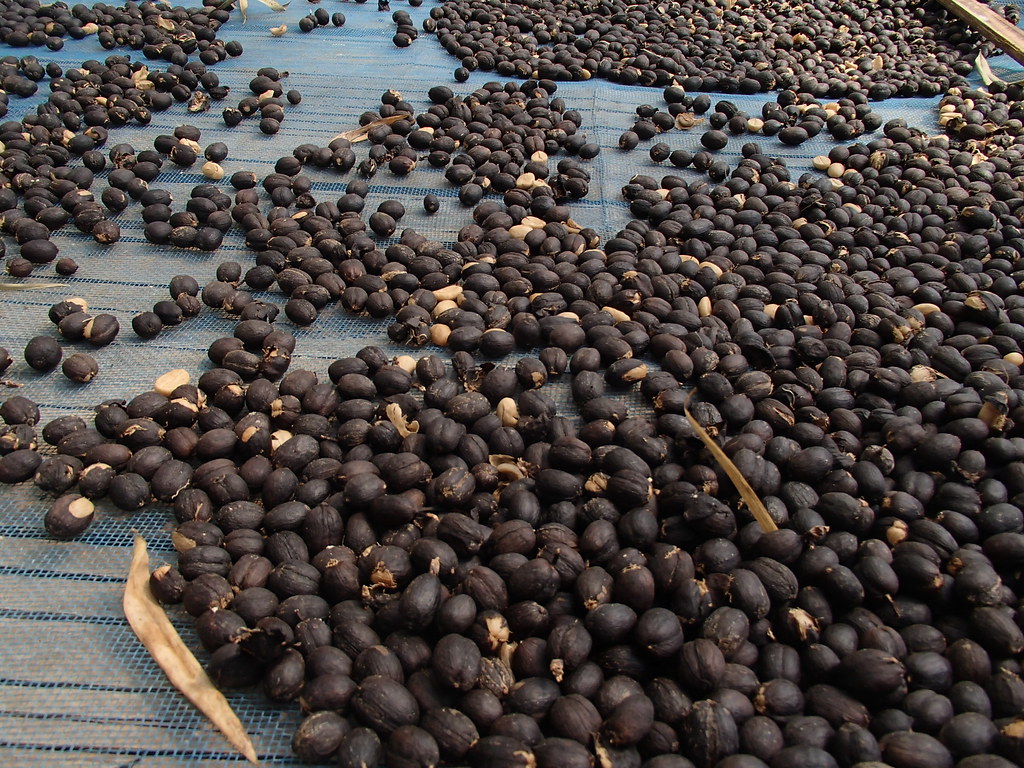 We conclude the top ten of the strange foods to be tasted in the world with a particular drink. Coffee experts, be alert: we talk about coffee called black ivory, a very rare specialty of Thailand. This drink is in fact obtained from coffee beans ingested by elephants and then recovered from their excrement.

The process of digestion of the beans by the elephants decomposes the proteins of the coffee making the final drink less bitter than the classic coffee. Considering that to produce 1 kg of coffee requires 33 kg of beans, the black ivory is sold at the stellar price of 50$ per cup and is only found in some luxury facilities. It is good that part of the proceeds from the sale is intended for the protection of elephants.

More in this category: « Travel&Food: Kopi Luwak, one of the most expensive coffee in the world The French baguette? It is actually made in Austria »