If you are in Rome and intend to come back, then do not hesitate to throw a coin into the famous Trevi Fountain to fulfill your desire.

Designed by Nicholas Salvi, the Fontana receives the waters of the aqueduct Vergine from the time of Augustus. Central theme of the work is the sea, and the Baroque meets with classicism, in a perfect harmony. The Trevi Fountain was a movie set, the scene of events and stage for large parties. Make one thing clear: Only Anita Ekberg in “The sweet life”, can afford to bathe in the fountain. If you try it, you’ll have to deal with the police that we guarantee, will not be soft. The beauty of the building really leaves you out of breath for its grandeur, and in a few noticed a detail that is said around, was built just for spite. On the right of the Trevi Fountain is a travertine vase, said “Ace of Cups” that according to the legend was put there by Salvi to cover the view from the shop of a barber who constantly criticized the architect’s work.

If you ask a person to indicate what is, in his opinion, the most famous fountain in the world, almost certainly will answer Trevi Fountain. Scenic and majestic, he announces its presence since the streets that lead to it: the noise of falling water in the basin is mixed with the voices of tourists, intent on launching the famous coin “to return to Rome.” Inaugurated in 19 AD the Trevi Fountain was conceived by M. V. Agrippa and is a unique example of ancient Roman aqueducts, always working from the time of Augustus up to the present day. It’s name is probably due to the presence of the intersection of three roads or to the triple water outlet. 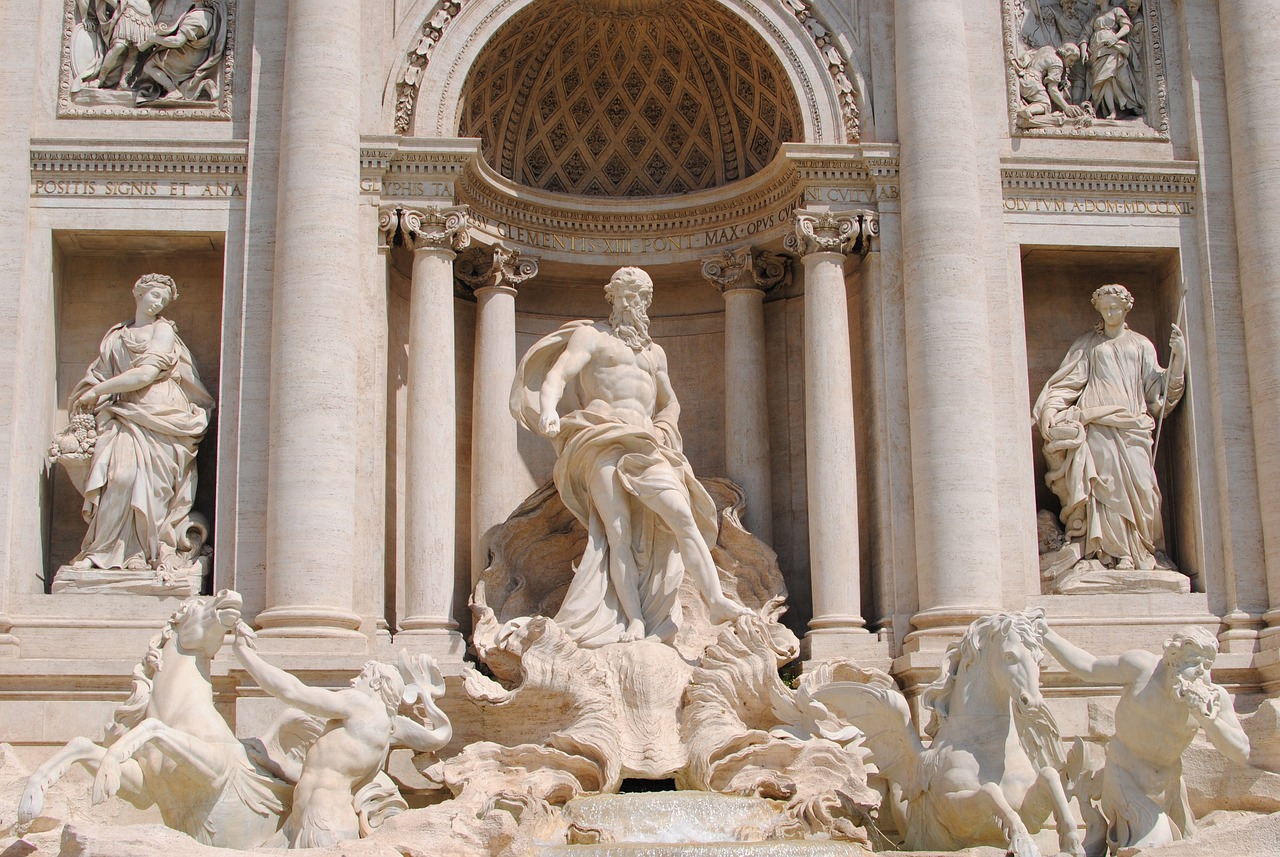 In 1453 Pope Nicholas V gave way to a work of order and restoration of the water following the plans of Leon Battista Alberti and Bernardo Rossellini, architects of the Virgin waters. The name of the Virgin Water, according to legend, would have been given by Agrippa in memory of a young girl (virgo) that would indicate the place of the springs to the soldiers who were in search. The architects built a prospectus of the fountain decorated with a inscription with the coats of arms of the pontiff and of the Roman people, under which the water emitted by three streams, gathered in a rectangular basin.

In 1640 Urban VIII Barberini decided that the fountain had to change orientation and entrusted the project to Gian Lorenzo Bernini. The construction works, however, were limited to the installation of a base with a basin in front of which there are three water openings. In 1732 Clement XII Corsini organized a competition for the arrangement of the Trevi Fountain in which take part the most important artists of the time. Among the projects of the architect Nicola Salvi, the Pope prefers the more monumental that interferes little with the rear Poli Palace. Salvi with great competence and professionalism is at the head of the construction work from 1732 until 1752, the year of his death, flanked by his good friend Luigi Vanvitelli.

What is the Trevi Fountain?

The central part of the façade is developed as a triumphal arch, with a deep niche beside the Corinthian columns. At the center of the attic there is a large inscription that recalls the construction of the fountain commissioned by Pope Clement XII whose effigy is at the top. Four large statues of 1735 adorn the building itself and symbolize, from left, the Abundance of fruits by Agostino Corsini, the Fertility of fields by Bernardo Ludovisi, the Gifts of  autumn by Francesco Queirolo and the Amenity of meadows by Bartolomeo Pincellotti.

In the large central niche there is a huge statue of Ocean that is driving a large shell-shaped chariot, pulled by two winged sea horses, one angry and the other peaceful, conducted by a tritons, young and a mature symbolizing the different features of nature and man’s age.

The sides of the large niche exhibit statues of Healthiness and Abundance by Filippo Della Valle, and the reliefs depicting the Virgin showing the source to the soldiers by Grossi, and Agrippa that agrees to the construction of the aqueduct of Bergondi. The official opening of the fountain occurred on May 22 of 1762.

Each year the City of Rome derives from these coins about 600 thousand Euros, destined to solidarity projects, despite the petty thieves equipped with elastic at the end of which is tied a magnet.