Historic square of political events, especially the Left, Piazza del Popolo (People’s Square) is also one of the most popular squares by the Romans.

Immense and spectacular, is located not far from the Tiber, just below the Pincio park and the confluence of three of the most important shopping streets of Rome: Via del Corso, Via del Babuino and Via di Ripetta. This makes it full of life, every day of the year. The origin of the name of the square is unclear: one of the hypotheses is that it derives from populus (poplar) in reference to the tradition that there was a grove of poplar trees in the area near the tomb of Nero.

Before the Napoleonic occupation and intervention of the architect Giuseppe Valadier, Piazza del Popolo had a different look. It was an anonymous Roman trapezoidal square who was at the convergence of three roads, which form the so-called trident, via del Corso, Via del Babuino and Via Ripetta, all three wanted by the indefatigable work of the town-planner pope Sixtus V and his architect Domenico Fontana. When the trident was opened, around Piazza del Popolo began a process of urbanization that focused around hospital complexes, ecclesiastical settlements and solemn aristocratic buildings, while the slopes of the Pincio maintained the distinctive country setting alternating vegetable gardens and luxurious villas. 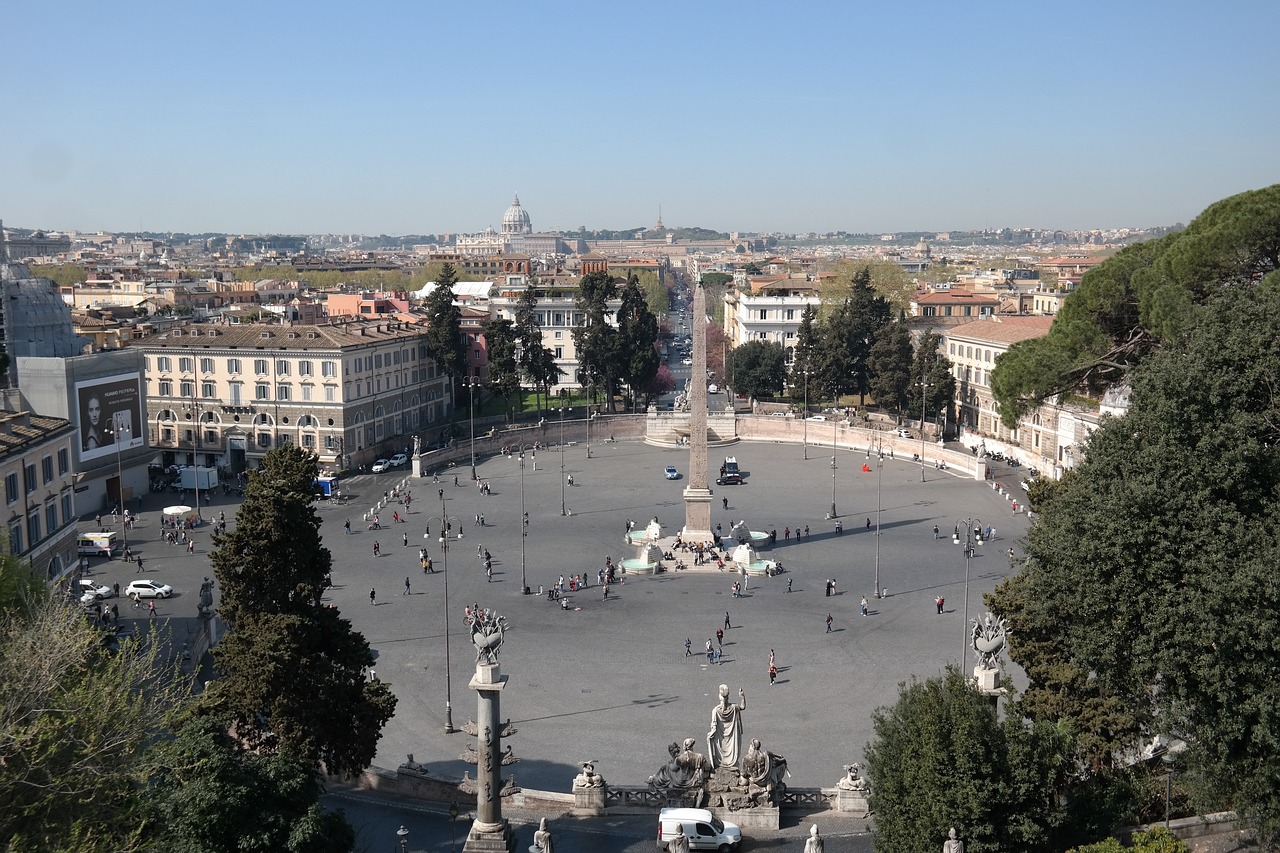 The fountains and the twin churches of Piazza del Popolo

Was the architect Valadier, helped by numerous artists including Giuseppe Ceccarini, transforming finally the appearance of Piazza del Popolo which assumed an elliptical shape in the central part completed by a double portico, adorned with fountains and statues, which extends up the Pincio terrace and the river Tiber. Originally in the square there was a single fountain by Giacomo Della Porta in 1573. With the addition of other fountains was necessary to increase the water flow and therefore, the sixteenth century duct of Virgin water, was sided by a branch of Happy water deriving from Villa Borghese.

At the center of the square, Valadier placed four basins around the obelisk whose water came from lions in Egyptian style. In the two lateral semicircles then there are two impressive clamshell fountains topped by a group of sculptures symbolizing respectively the god Neptune with newts and the goddess Rome beside the personifications of the Tiber and Aniene. There are also two fountains made with ancient sarcophagi on the side of the Church of Santa Maria del Popolo and the building symmetrically opposite. Even under the arches of the Pincio terrace, there is a fountain with a vigorous jet built later. In the background of the obelisk, there are the twin churches of Carlo Fontana of Santa Maria di Montesanto (1662-1679) and Santa Maria dei Miracoli (1675-1681) built on the orders of Pope Alexander VII.

The Obelisk on Piazza del Popolo

In the beautiful setting of Piazza del Popolo stands the Egyptian obelisk up 23.9 meters of the fourteenth century BC It was the first obelisk to be transported to Rome in the time of Augustus to celebrate the victory over Egypt and was initially placed in the Circus Maximus. In ancient times the obelisk of Piazza del Popolo served to entertain the Romans after blindfolding a playmate, forced him to walk from the obelisk to Via del Corso; rarely the victim was able to conclude the path hindered by obstacles along the way.

How to reach: metro Flaminio (MEA)