It is one of the most beloved places to Romans and tourists, the ideal place to spend time while sitting at a table in a bar, between sculptures and Baroque architecture.

Navona square is the site of the ancient Stadium of Domitian (hence its oval shape), wanted by the emperor to host the athletics competitions (agones). Until the nineteenth century, in the square were organized recreational and sport shows. In August, the square was flooded by closing the discharges of the fountains, to give a some coolness to the Romans. The main attraction of the Piazza Navona is the Fountain of the Four Rivers, designed by Gian Lorenzo Bernini (1651). The rivers are the Ganges, the Danube, the Rio de la Plata and the Nile represented by four giants arranged on a pyramidal rock from which rises a Roman obelisk. In front of the magnificent fountain stands the church of Sant’Agnese in Agone with a concave facade, designed by Borromini to emphasize the dome. Embellish the square two fountains, namely, the Fountain of Neptune or of Calderari, at the northern end, and the Fontana del Moro facing Palazzo Pamphilj (south of the square), designed by Giacomo della Porta. Populated by tourists in the day and by young spending their evenings, not to be missed, especially during the Christmas season when filled with characteristics stands and the night between January 5 and 6 at the feast of the Epiphany. 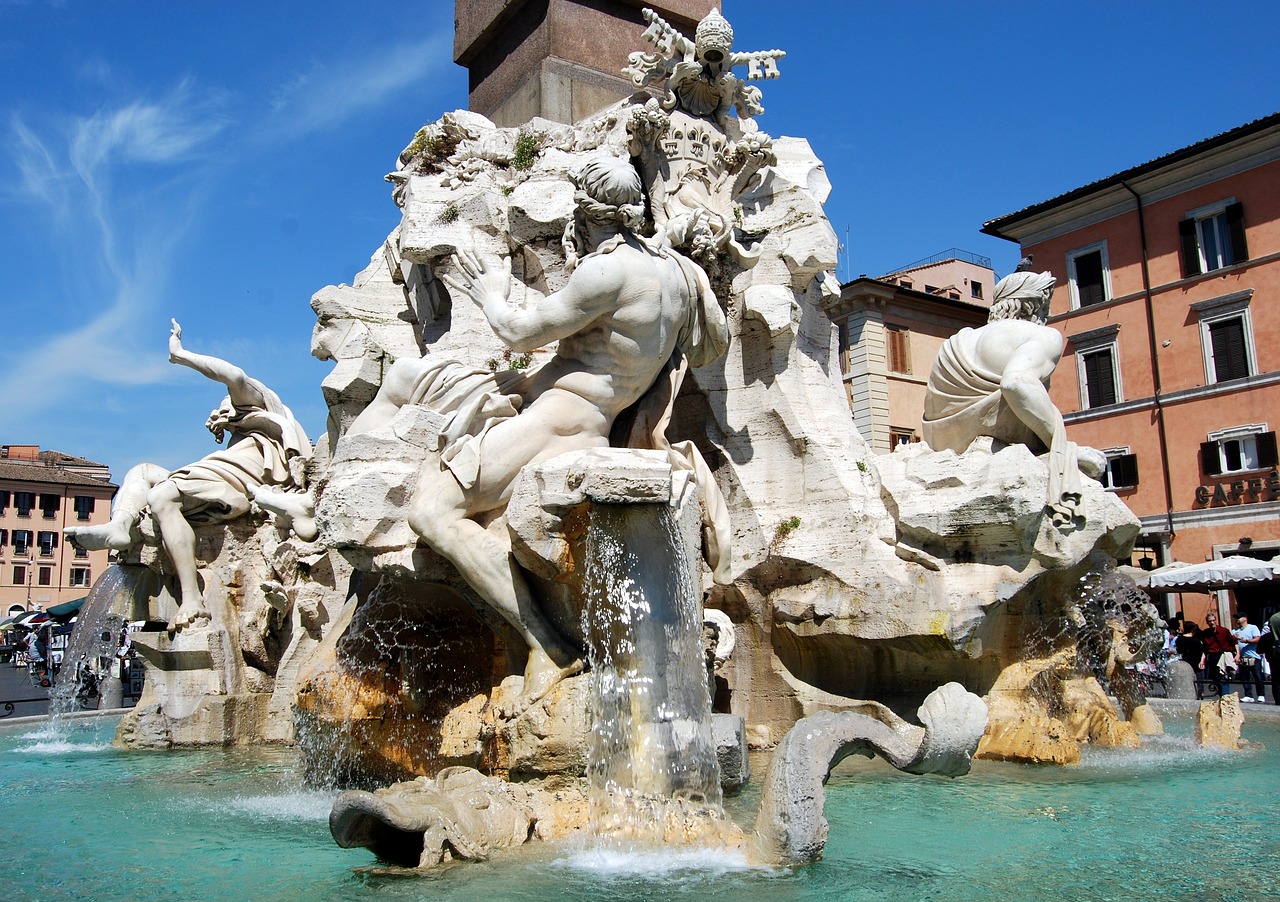 On any given day, at any time, on Piazza Navona there are people. They are not only tourists, but also many romans, who come here to sit on the benches, get ice cream in bars along the square, or simply watch the crowds of tourists stroll among the fountains and palaces of this masterpiece of the Baroque. Piazza Navona is one of the most popular squares for the Romans, for centuries, a place dedicated to the fun of poor and aristocrats. On summer evenings, when the sunset colors of the red roofs of Rome, Piazza Navona is one of the most beautiful places to be. The rectangle of sky above the square darkens slowly, while in homes and restaurants turn on the yellow lights. Popping up from any of the side streets, one is enraptured by its beauty. It always happens, that’s why who has been here at least once, dreams for the whole life to return to Piazza Navona.

Piazza Navona has always been the place of the Roman games. The original form of the present square, in fact, closely mimics the perimeter of the ancient stadium of Domitian built in 86 AD. for the practice of athletics and horse racing. The remains of this ancient structure are within 5-6 meters below today’s street level and you can see them again in a modern building in Piazza di Tor Sanguigna and in the basement of the church of Sant’Agnese in Agone. The modern name of the square comes from the Agones which in Latin means precisely “games”. 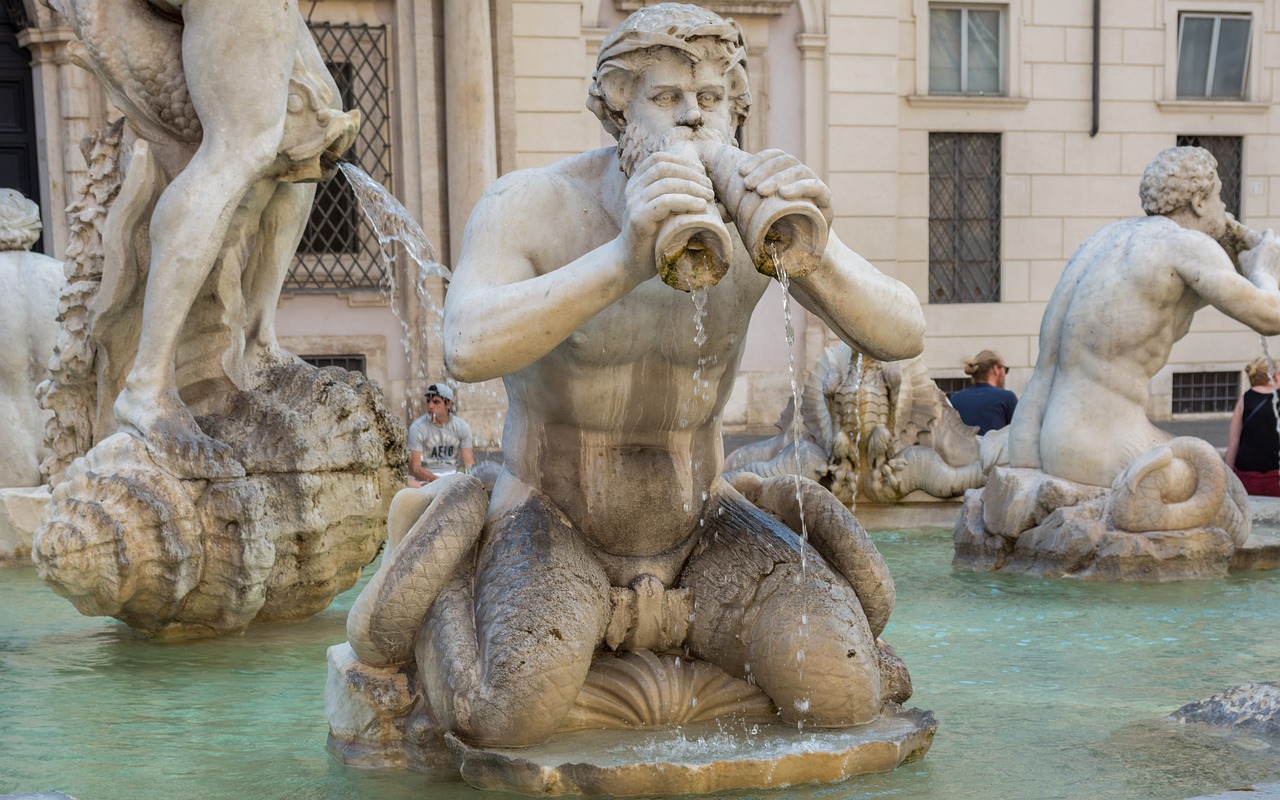 The place where there is the church of Sant’Agnese in Agone designed by Borromini is, according to tradition, the place where at the end of the third century the old Agnes was martyred during the furious persecutions by Emperor Diocletian. The naked body of the saint was exposed to the derision of the pagans, but miraculously her hair lengthened suddenly and managed to cover it. One of the most hilarious show that was held in this square was the so-called “lake” which was held during the warmer months: the only point of discharge of the waters of the Rivers Fountain was closed thus causing the flooding of the square to allow people to cool off. This practice was discontinued in the late nineteenth century for hygienic reasons. For a long time Piazza Navona was the favorite place in Rome by storytellers, actors and charlatans selling everything from food to used books, through the vessels of brass. Even today it is the place of street artists, puppeteers and portraitists who for a few euro offer you a caricature.

The current appearance of Piazza Navona was fixed in the seventeenth century when the noble family of Pamphilj, who resided in this area, assigned to the most important architects of the time to redesign the area to make it one of the most striking areas of the city. At the center of the square is the Fountain of the Rivers assigned to Gian Lorenzo Bernini by Pope Innocent X Pamphilj for the Jubilee of 1650. The fountain consists of a stone cliff representing the earth, excavated from caves from which comes out to drink a lion and fantastic animals, an obelisk that prods the sky, recovered from the Circus of Massenzio on the Appian. Around it are the statues of four rivers: the Ganges, Nile, Danube and Rio de la Plata, symbolizing the four continents.