If it is true that “when falls the Coliseum, Rome shall fall, and with her the whole world”, we very much hope that the building will stand for a little while yet. Inaugurated as the Flavian Amphitheatre was called Colosseum only at a later time, probably because of the enormous statue known as the “Colossus of the Sun God”, that was standing near, and that had the appearance of Nero.

The Romans delighted seeing here, the fights between gladiators and wild animals, or simulations of naval battles. The construction of the Colosseum was desired and begun by Emperor Vespasian, the founder of the Flavian dynasty, and continued in the years to come. Titus, the son and successor of Vespasian, added two rows of seats to the structure wanted by his father, and to celebrate the work (A.D. 80), called for a hundred days of games. The Colosseum is still one of Rome’s most important and representative monuments, which imposes its majestic presence at the center of the city. Nearby the Amphitheatre is easy to find the “Centurions”, cute characters dressed in the typical attire of the Roman fighters that, between a joke in “romanaccio” and a picture, have become part of the tradition too. Even without knowing its history and architecture, all are fascinated by the monument for which Rome is famous all over the world. Observe it at night with all the lights on, it is really beyond words!

If there is a universal symbol to identify Rome in the world, this is certainly the Flavian Amphitheater, or as it is more commonly called, the “Colosseum”, the largest amphitheater in Rome, but also in the world. Stands majestically in the archaeological heart of Rome from 72 AD, wanted by the Flavian dynasty who had built it in the area occupied by the adjoining artificial lake of the Domus Aurea.

The name “Colosseum” is due to a ‘imposing bronze statue, the “Colossus of Nero”, which was located nearby. Its central location was made possible following the disastrous fire in 64 AD. during the reign of Nero, who freed space to build on. It was an easy place to reach, since, there were no mass transportation. 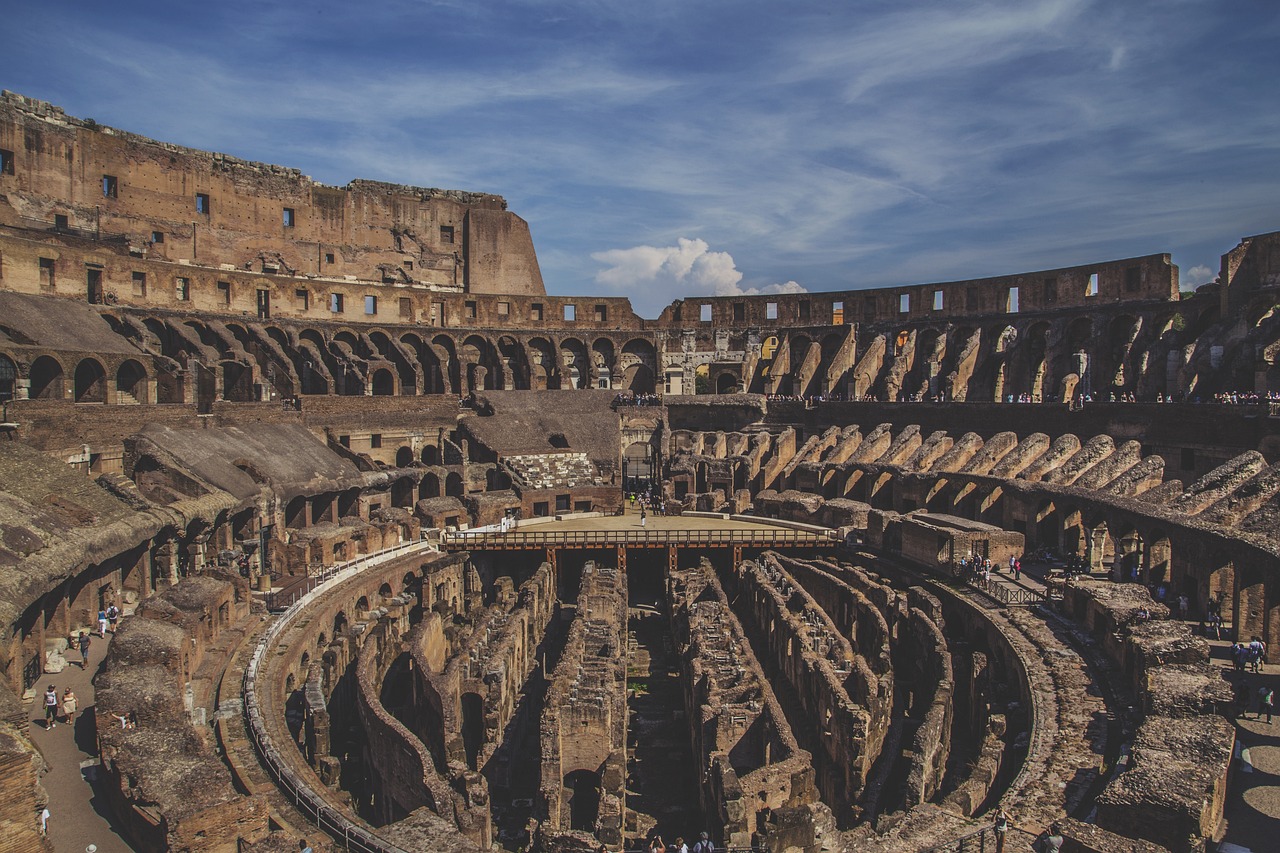 The rise and fall of a symbol of ancient Rome

In 79 AD the Colosseum was dedicated to Vespasian and was inaugurated by Titus in 80 AD with games that seems to have lasted 100 days in which 5,000 animals were slaughtered, sacrificed to appease the citizens. The Colosseum was later completed by Domitian and restored by Severus Alessandro. During the late Empire the Colosseum hosted performances of great popular appeal as the hunts and gladiator fights. In 217 AD the upper porch of the Colosseum and the underground structures burned down due to a fire caused by lightning and the shows for the next five years had to take place in the Circus Maximus. This explains the characteristic shape that made him famous all over the world. Between 250 AD and 252 AD and in 320 Ad other fires devastated it. Later there was also a disastrous earthquake in September of 1349 AD that brought down a large part of the exterior walls and arches supporting  the amphitheater.

Large amounts of travertine blocks that made up the primary backbone of the building were taken away and used for the reconstruction of buildings demolished. Gradually the Colosseum, left to itself, was first transformed into a fortress against the barbarian invasions and further an almost inexhaustible pit of materials. Being now very ruined and degraded, the Pope Sixtus V decided to shoot it down completely, but then instead chose to introduce it in the itinerary of the basilicas. The continued looting came to an end in the eighteenth century when Benedict XIV dedicated the amphitheater to the passion of Christ and raised the crucifix in the central part of the building, at side of the arena.

The architecture of the Coliseum

The outside and the load-bearing structures of the Colosseum was built of travertine, while the other areas of tufa, brick and concrete. It is 188 meters long and 156 meters wide. Three rows of arches relieve the majesty of the facade about 50 meters high, while the indoor elliptical arena measures 86 x 54 meters and was separated from the auditorium by a podium, decorated with niches and embellished with marble, reserved exclusively to the members of the imperial family and other personalities. The auditorium was divided according to the social class of the spectators: the lower bleachers reserved for the patricians were in marble and divided into sectors, while the last, in which there was the populace, were made of wood and separated by a high wall. The amphitheater could accommodate about 150,000 spectators who could access their fields through the vaulted corridors trails towards the stairs of the various plans; an awning provided protection from the sun. In the basements of the arena there were tunnels for the beasts, the scenic equipment and elevators. Among the services to the public, in addition to drinking fountains scattered at regular intervals along some interior corridors, there were extravagant too: sprinklers of liquids scented with rose, saffron or other essences.

What games were held in the Coliseum?

The amphitheater was the setting for different types of games: fights between animals (venationes), sentenced killed by wild beasts (noxii) and fights between gladiators (munera). Most shows were hold in spring, summer (except August) and autumn. The gladiators were the ones that attracted the attention of the people. The tradition of the fighting seems to have been handed down by the Etruscans who believed it was right to sacrifice the prisoners of war or slaves during the games. The Romans also really appreciated the naval battles (naumachia), frequent during the reigns of Domitian and Vespasian; this suggests that the original paving of the Colosseum was of such magnitude that it contains within itself great amount of water. The latest evidence of the fights of gladiators back up to 437 AD, but the amphitheater still continued to be used for the killing of animals around the 523 AD, under Theodoric.

The beasts used in the Colosseum battles

Only after the conquest of new distant Asian and African provinces, the Latin world has had the opportunity to know the extravagant appearance, unusual and scary wild beasts. Their brutality and their size intrigued and attracted the public that more and more loved this exciting entertainment, especially when brave men were confronted with them. The struggles with the beasts were very bloody and engaging because including many animals of different races who, excited and terrified by the noise of the crowd, attacked with ferocity emitting shocking sounds. Sometimes they could see hunters with bows and arrows killed deer or gazelles, sometimes to succumb were exotic animals like ostriches. You could also see fights between animals, for example, they were bound together by chains a bull and an elephant, or other large animals, while men teased them with long rods encouraging them to fight. The exploitation of exotic animals, such as tigers, in all major amphitheaters of the Empire caused a real impoverishment of wildlife in Europe, North Africa and the Middle East.

The Coliseum gladiators between myth and reality

They take their name from the sword, a short sword that used in the fighting. The barracks in which they lived was called “Ludus gladiatorius”, were grouped into schools called  “Familiae” where they learned the techniques of struggle and took care of their athletic training thanks to the masters: the “lanistae”, veterans survived in hard battles with a lot of experience ; trainings were very hard. Much of the fighters were among slaves and prisoners of common crimes, but there were free men who risked their lives to get a little celebrity and popularity. The celebrity of the champions was truly remarkable, the audience cheered them and followed them with great passion. The gladiators knew juggle different weapons which assumed different assault or defense techniques. According to their type of armament they were called by different names: Cetervari, Secutores, Reziari, Mirmillones Traces.

How to reach: Metro Colosseo (M1)

How to Prevent and Remove Head Lice While Travelling

Take pictures while travelling: how to avoid common mistakes

Between follies and ancient traditions: the carnival in the world