With its domed and columned portico, the Pantheon is one of the most famous Roman monuments. According to a legend, it is the place where Romulus, after his death, was seized and taken to heaven by an eagle. Temple dedicated to all gods (Pan- all Theon- gods), was built by Emperor Hadrian between 118 and 125 A.D. replacing an earlier temple of Marcus Agrippa consecrated to Mars and Venus.

In 609 AD, the Roman temple was converted into a Christian basilica by the name of Santa Maria ad Martyres. In 1870 it became shrine of the kings of Italy. Inside are the tombs of Victor Emmanuel II, Umberto I and Margherita of Savoy, as well as that of the great Raffaello Sanzio. What characterizes more than anything else in the building is the largest hemispherical dome of 43.3 m diameter equal to the height from the floor, on top of which there is the largest – and only – opening (9 m.), the oculus (eye). From this hole comes the light, but also when it rains the water that falls, however, flows rapidly thanks to both central and lateral holes on the floor that prevent the formation of puddles. So, it is not true that in the Pantheon does not enter the rain. While it is true that when it rains, the opening creates a “chimney effect” that is, an upward air current that leads to the crushing of the water drops. Thus, even when the rain is pouring outside, the feeling is that inside it rains less.

The first thing that strikes the Pantheon is the largest Latin inscription with bronze letters: M.Agrippa L.F.Cos. Tertium.Fecit ( “Marcus Agrippa, son of Lucius, Consul for the third time, built”). In fact, this inscription dates back to the first “version” of the Pantheon, one built by Agrippa, son of Augustus, in 27 AD. What you see today, however, is the Pantheon rebuilt by Hadrianin 118-125 A, who however, for a long time, wanted to keep on the front of the building the original inscription to which, for a long time, the scholars could not give a precise chronological position.

The Pantheon, in greek, is the place where gather all the gods. The function that was to play in ancient Rome is still uncertain. According to historians, it was built to house the statues of many gods of pagan Rome, but the name may also derive from the fact that the dome recall the sky. Agrippa almost certainly wanted to make a temple dedicated to the worship of the gods protectors of the Julian family, especially Mars and Venus. 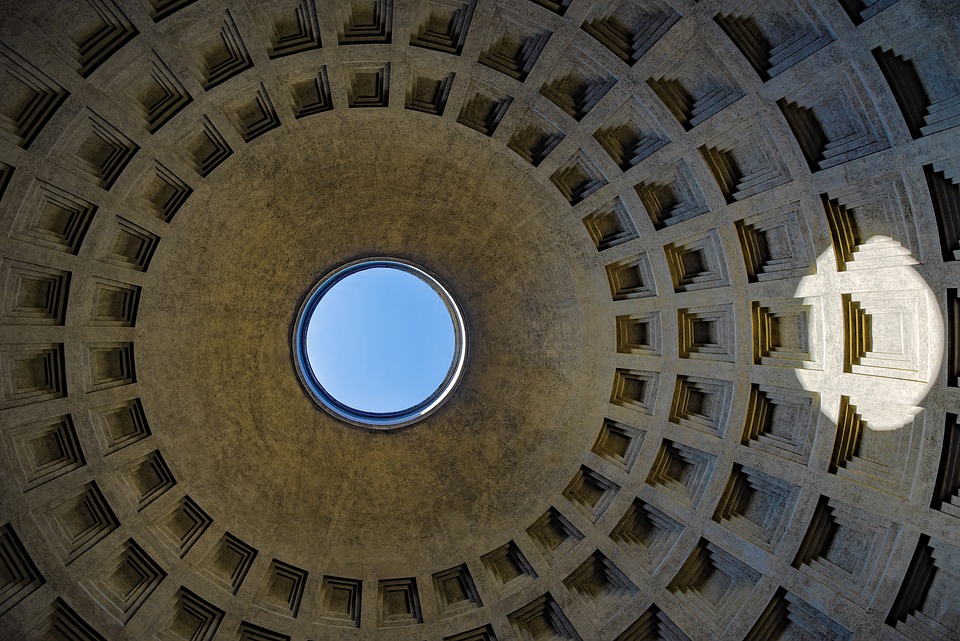 A Brief History of the Pantheon

When the Empire fell the Pantheon was abandoned until the emperor of Byzantium, Foca, ceded it in 608 AD to Boniface IV who consecrated it to the Virgin and all the martyrs. Subsequently it also had the function of small fortress and in 1652 Urban VIII Barberini eliminated the bronze coating of the porch beams from which he obtained 80 cannons assigned to Castel Sant’Angelo and the four twisted columns of St. Peter’s canopy. When it was proclaimed the Unity, the Pantheon changed the function to shrine of the kings of Italy and the subsequent restoration eliminated the fences of the porch and the famous “donkey ears”, the bell towers added by Gian Lorenzo Bernini.

What amazes the visitor of the Pantheon is the contrast between (Pronao) the square entrance, typical of the temples, and the immense rounded interior space typical of structures in Ancient Rome that had a thermal function. The imposing portico, beyond which opens the portal and two niches designed probably for the statues of Augustus and Agrippa, is decorated with 16 gray and pink granite columns 13 meters high. The walls of the round, double 6.2 m, are in bricks and the dome, the largest ever built in masonry, is in conglomerate.

The dome is one of the construction wonders of all time: a real technological gem that has withstood 2,000 years of earthquakes. The dome in concrete, in fact, was built by following a pioneering technique that used materials always lighter while it moved from below upwards. The architects used a particularly light conglomerate (opus caementicium) formed by mortar and travertine flakes, replaced as they go up from lava and pumice stone. Under the stones there is a wooden structure to which must be added many relieving arches on which it distributes the weight.

Famous paintings and famous tombs: the interior of the Pantheon

Inside the Pantheon there are seven semi-circular and rectangular niches placed between pairs of ribbed columns in yellow ancient and pavonazzetto (black/gray- veined white) interspersed with aedicule (niches) with columns supporting pediments; there is then an eighth niche, topped by an arch, which is situated opposite the entrance. In the vault that is adorned with five tiers of drawers, the only source of natural light is the eye edged in bronze of 9 meters and the floor is in large part with the original squares and circles motif. In almost all niches there is something to admire: the first is the “Annunciation” fresco by Melozzo da Forli, in the second there is the tomb of Vittorio Emanuele II designed by Manfredo Manfredi, in the sixth there are the tombs by Umberto I and Margherita di Savoia, in the seventh, called the Virtuosi of the Pantheon, there are funeral inscriptions of Flaminio Vacca, Taddeo Zuccari and Perin del Vaga. Inside the Pantheon there is also the tomb of Raphael placed under the Madonna del Sasso Lorenzetto.

Pantheon in the rain?

It is said that in the Pantheon it never rains, although there is the immense oculus from which it is expected to enter the water. In fact, in the Pantheon it rains in ad in all the houses where there is no roof. Not surprisingly, in the middle of the floor, just below the oculus, there are gutters that collect the rain.

Spots of St. Petersburg: The Church of the Savior on Spilled...