Well-known around the globe as the stinky fruit, 50% of western who tried it hates its flavor. It is the Durian.

The food writer Richard Sterling describes its odor as “turpentine and onions, garnished with a gym sock. It can be smelled from yards away”. Anthony Bourdain tells “indescribable, something you will either love or despise…Your breath will smell as if you’d been French-kissing your dead grandmother”. 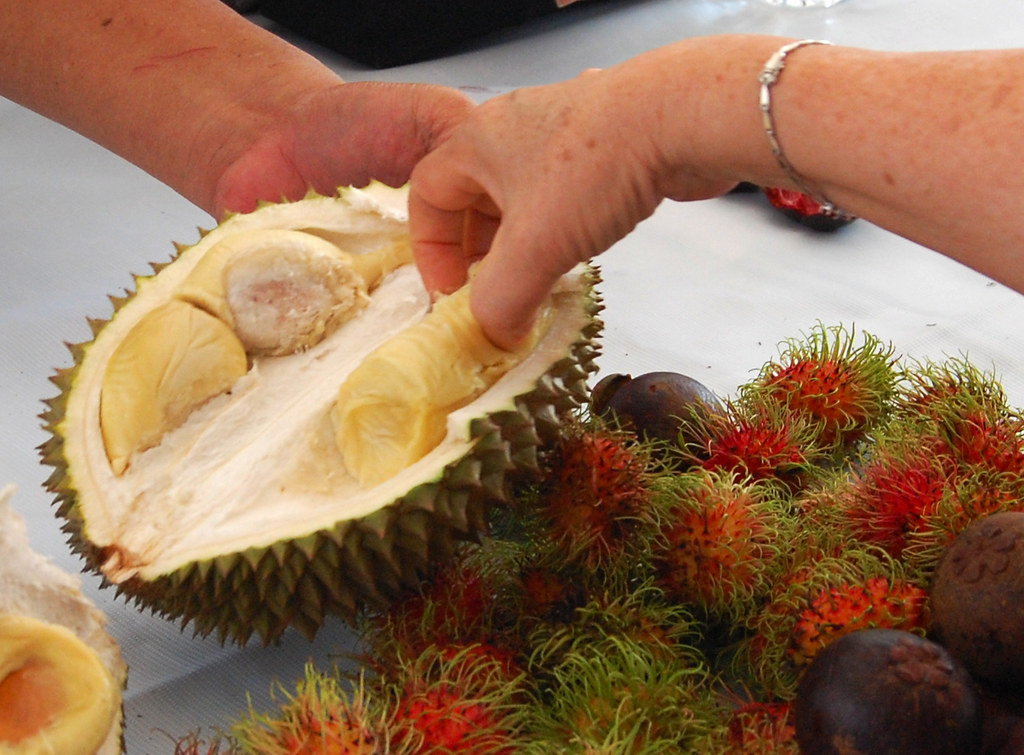 The durian is a tropical fruit character in Malaysia, you can find it easily in Singapore, Indonesia, Brunei, Thailand, and generally in all Southeast Asian countries.

Duri means spiny in Malaysian, describe unambiguously the unfriendly look and the rind that can hardly be opened without a knife. In such a way, it seems to want to say “do not open me” to the unwitting observer, curious to know its content. The smell of its pulp is described by the English naturalist Alfred Russel Wallace as “custard rich with strong hints of almond, with possible off-flavors of onion sauce, cream cheese, and sherry “.

The pungent and penetrating smell makes it hated and despised (to the point of being explicitly forbidden on the Singapore metro, as well as other places) however there are those who appreciate the taste of its creamy and sweet flesh, comparing it to a fine cheese.

The local population, in Malaysia, calls him “the king of fruits” for its imposing (can weigh 3 kg) and intimidating appearance and the unique character of its flavor and its unmistakable smell. It has been attributed to medicinal properties and aphrodisiac, surprising, considering the smell! If you are in Asia and particularly in Malaysia you could taste this strange fruit in desserts, cakes, cookies, even ice creams.

The fruit itself is an integral part of the local culture of many locations and is present in anecdotes, jokes, humor, puns. The Esplanade building in Singapore has the roof durian-shaped and the Indonesian capital Jakarta is sometimes called “the big durian”.

Have you ever tried the Durian? Do you like it or not? How would you describe the smell? And the taste? Tell us your experience with a comment below.

Fruits and vegetables: 10 oddities around the world

The 5 most curious hostels in Europe

The 10 ugliest hotels in the world

Snow Roller: where to admire the curious snow wheels

Travel&Shopping: 10 most collected souvenirs around the world

Taste of Belgium: typical Belgian food you should try